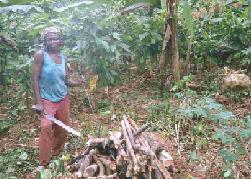 Investigation of the market for confectionery and cocoa products in Uzbekistan on behalf of LMC Ltd, Oxford, UK and Malaysian Cocoa Board.   Feb 2009

Investigation of the market for confectionery and cocoa products in Kazakhstan and Kyrgyzstan.  Nov 2008

Action Plan for the rehabilitation of cocoa production in Trinidad & Tobago. The country is one of a handful of producers of fine grade cocoa, but production has fallen to a few thousand tonnes. The project involved consultation with policy makers, extension personnel, exporters and a wide cross-section of farmers. HTS Consulting for EU Dec/Jan 1999

Advice on the liberalisation and privatisation of coffee and cocoa sales. Advisory team included privatisation specialists, a legal specialist and an economist. My role as the economist was to review the performance of the coffee and cocoa markets and to assess the implications of liberalisation for farmers and government finances.  Deloitte & Touche for Government of Cote d’Ivoire.  June 1999

Held at the Cocoa Research Institute of Ghana (CRIG) to provide officials from the Dept of Agriculture with advice on smallholder cocoa farming and the results from the previous year’s extension messages and socio-economic studies.  Masdar. Aug 1998

This project formed part of an on-going Cocoa Rehabilitation Project in Ghana. Two projects, a large-scale Socio-Economic Study of cocoa farming and an Extension Messages study ran in parallel for over six months. The project team consisted of a socio-economist, policy economist and a farming systems advisor. It involved a nationwide survey involving a combination of semi-structured approaches and structured interviews as well as participatory approaches in collaboration with counterparts from the Cocoa Research Institute of Ghana.  Masdar for AfDB 1997

Any cookies that may not be particularly necessary for the website to function and is used specifically to collect user personal data via analytics, ads, other embedded contents are termed as non-necessary cookies. It is mandatory to procure user consent prior to running these cookies on your website.

Performance cookies are used to understand and analyze the key performance indexes of the website which helps in delivering a better user experience for the visitors.